For the past three years, Women’s Advisory Boards (WABs) in Iraq have engaged with local officials to advance projects and policies that respond to the needs of their communities through a gendered lens in order to improve the lives of some of society’s most vulnerable members. This summer, more than 100 WAB members and guests came together for a conference in Erbil to celebrate their progress and to share ideas to further elevate women’s influence in policy-making. Guests comprised Iraqi government officials, including members of parliament, as well as representatives of foreign governments and local and international nonprofit organizations. As a part of the event, the National Democratic Institute (NDI) presented this video summarizing the WABs’ achievements:

The Supporting Gender-Sensitive Local Governance through Women’s Advisory Boards Program is funded by the Government of Canada and is one of the first programs implemented within the framework of Canada’s Feminist International Assistance Policy. Since 2019, following Iraq’s liberation from ISIS, NDI has convened WABs in the five most ISIS-affected provinces of Anbar, Diyala, Kirkuk, Ninewa and Salahaddin with the goal of increasing women's participation in local governance. NDI continues to mentor the WABs as they develop relationships with local decision-makers to advance issues important to women, girls and all Iraqis in their communities.

The Canadian Ambassador to Iraq, Gregory Galligan, spoke at the conference and received thanks from various WAB members, including one from Kirkuk. Thanking the Canadian Government and NDI, she remarked, “NDI helped women fight and overcome fear from working in politics. We are honored to work with NDI to get to the parliament and stakeholders. NDI introduced a lot of programs that support Iraqi women, including peace and reconciliation. We need your continuous support. We want you to continue to provide us with this type of support so that we can spread this movement across the country.”

The WAB members spoke about their work over the past three years on local initiative projects to make tangible improvements in their communities, such as rehabilitating parks, making public buildings more accessible to persons with disabilities, and facilitating art competitions to raise awareness of issues affecting women and girls. They also spoke about how they applied lessons from NDI’s workshops on gender-sensitive policy development in order to perform local needs assessments and present findings and recommendations to decision-makers for policies that can improve access to education and reduce the gender gap between girls and boys.

WAB members gave presentations to show the transformative value of the bonds they built as they worked together. The Diyala WAB’s performance portrayed a group of women from different sects and backgrounds in traditional attire, who at first did not know each other and saw things differently. At the beginning, the women sat on the floor surrounded by baskets of oranges—a symbol of Diyala province. They held signs representing issues faced by women, including Discrimination, Bullying, Violence, Silence, Ignorance, Suffering, Poverty, and Marginalization. Wearing the Iraqi flag and holding a banner with the Diyala WAB logo, one member entered the stage and, one by one, reached out to the other women to help them stand up as they dropped their signs so that by the end, all the women were standing together. This symbolized the actions of the WAB to help eradicate those issues as the members joined forces and mobilized collectively to empower women in Diyala. 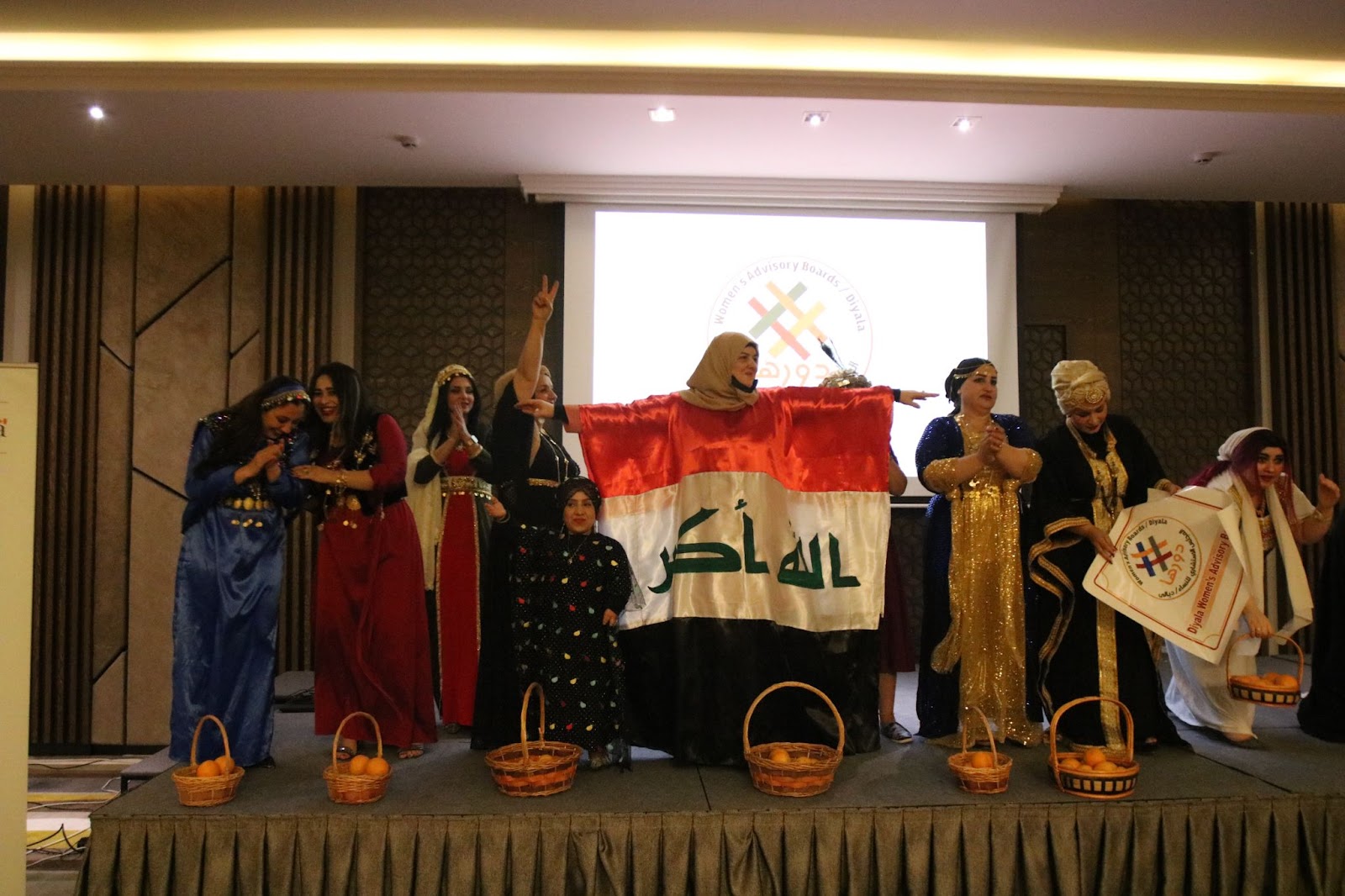 The heads of the Provincial Women’s Empowerment Departments from each of the five provinces spoke about how they were able to work in cooperation with the WABs to advance gender-sensitive policies, and they made plans for future collaboration. Although NDI’s program formally ends later this year, the WAB members remain motivated to continue their work and are making sustainable plans so that the WABs can live on as independent civil society organizations or in partnership with existing organizations.

This program is implemented with funding from the Government of Canada.